What Would Happen if CVs Had Numbers, Not Names?

We live in a world that is facing constant change where today’s challenges can be viewed as tomorrow’s opportunities. To thrive, businesses and their people need to be dynamic, intelligent and innovative. For many organisations, their current thought processes could be standing in the way of accessing the candidates best suited for the position. Having bias in your recruitment process, whether conscious or otherwise, can undermine your workplace culture, restrict access to some of the best people in the market and potentially remove your edge over your competitors who look solely at matching competencies.

Of course, if eliminating unconscious bias was easy, there wouldn’t be as much discussion about it. The problem is that many people are completely unaware that they may be discriminating against certain groups of people because, well, it is unconscious bias. Taking proactive steps towards acknowledging any preconceptions in your recruitment process starts by observing your current team and company diversity. To help you understand any possible bias within your business and create a culture that breeds innovation, inclusiveness and diversity, we have put together this guide. 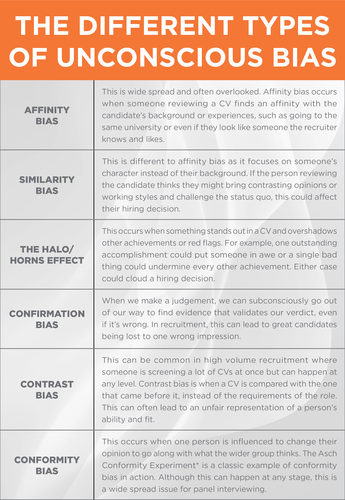 What is Unconscious Bias?

In short, unconscious bias is a preconceived opinion about certain groups of people that is formed outside of someone’s conscious awareness. As an example, a person’s name can sometimes identify their gender or ethnicity, and whilst neither are normally important to the job requirements, they can subconsciously impact a hiring decision. So, what if resumes had numbers instead of names, would this solve the problem?

The short answer is no, because unconscious bias isn’t limited to race or gender, and there is plenty of other information on a CV that can lead to the same discrimination, such as where and when they went to university. This can then play a significant part throughout the entire interview process. Turning your biases from unconscious to conscious is the first step, however before you can make an active effort to uncover your own biases, you’ll need to understand what types exist.

As mentioned earlier, most people don’t realise they have any bias towards others. An important step towards removing bias in your business is to raise awareness. This is often difficult because people generally don’t want to face the fact that they may be biased, but the reality is that it does affect everyone.

The best way to build awareness is to show that you are taking active steps to tackle your own preconceived thoughts and change the way you think. There are some great online tools to help you identify your own unconscious biases, such as Harvard’s “Project Implicit”.

Once you have identified your own unconscious biases, look at your business’s current hiring policies and processes that might unknowingly foster this behaviour in yourself and others. For instance, the way your job advertisements are written could be naturally discouraging a gender from applying.

It’s important to note that you shouldn’t try to force someone to change their opinions, as studies have suggested that people are more likely to turn their unconscious bias into conscious bias if they feel they are being coerced to change. To avoid this, focus on highlighting the impact it has on your business and champion change through leading by example.

You can also use third party tools to address unconscious bias and focus on finding best-fit candidates, such as small scale psychometric testing or working with a trusted recruitment partner. The key with any recruitment tool however, is that there must be trust. For example, if you don’t believe that the people your recruiter has put forward are capable and a great fit for your business, you might find that confirmation bias (see above) starts to cloud your judgement.

Another example is Vodafone, which is trying out several different methods including testing the effects of removing gender from the CVs of job applicants in India, to see what impact this would have on increasing the number of women in technology. In addition, the Telco giant is also running job descriptions through a tool that removes corporate jargon and words that research suggests can put off female applicants. To add further to their process, they are also using an algorithm-driven recruitment platform which aims to increase the number of graduate applications from ‘under-represented’ universities.

The team at Fletcher in New Zealand wanted to reduce unconscious bias whilst assessing candidate’s personality, culture and skills requirements. To do this, they used software to obscure all identifying data throughout their entire screening process. This apparently resulted in more high-quality candidates being shortlisted who might not have made it through a traditional recruitment process.

Acknowledging biases in your recruitment process, whether unconscious or not, is the first step to tackling incorrect preconceptions and ensuring that you hire the very best person for the job. Aside from this benefit to your team and the business as a whole, frankly, it’s the right thing to do. Whether you decide to try blind recruitment or introduce small-scale psychometric testing to get to know your candidates better, the key is to ensure you can trust your recruitment solution to deliver exactly what your business needs.

As Sydney’s Accounting Recruitment specialists, we pride ourselves in connecting organisations with the best candidates for the job without bias. To find out how we can help your business connect with diverse and innovative thinkers, get in touch.

If you enjoyed reading this article, don’t forget to follow us on LinkedIn for all our latest articles.